Content notes for mention of rape, biphobia, abuse, including therapeutic abuse, and bierasure.

I had the great pleasure of attending the Pink Therapy annual conference this spring. Entitled beyond Gay and Straight it focused on the experiences of bisexual people in a variety of contexts. Some, such as the worse mental health outcomes  for bisexual people, was familiar territory to me, other aspects, such as the seminar on gay men who marry straight cis women were thought-provoking and challenging in the best way.

There was too much covered in the day to give a seminar by seminar break down, fortunately Pink Therapy has put videos from the conference on You Tube. I was struck by a theme of trusting self-identification of both gender, and sexuality running through the day, and how much resistance there is to this.

Many bisexual people report being treated as if their sexuality… I’ve been asked by several people who have been unhappy with BACP’s complacency with regard to responding to the fact that LGBT people are known to have poorer mental health and who are overrepresented in the therapy population, as to what they could actually be doing to improve the situation.

The following points could also be applied to all the other psy/therapy professional bodies as well, but as BACP is the largest (and wealthiest) organisation, the could easily be leading by example here and putting in some extra energy.

1. Develop some core competencies on Equality and Diversity related issues that take account of the complexity of intersectionality.

2. Ensure all therapists receive some basic sexuality awareness training so that they can discuss sexual issues with their clients.

3. Ensure Gender, Sexuality and Relationship Diversity (GSRD) issues are woven throughout the therapy training and not just a tokenistic add on.  But there needs to be some specialist add on’s too!

4. Closely audit accredited courses to ensure they are meeting these requirements.

5. The specialist training in GSRD issues should be delivered either by faculty if they feel competent, or by external trainers. Students enrolled in the programme should not be expected or asked to deliver this training.

6. Fund a researcher to produce training materials on the subject of Attempts to Change Sexuality or suppress Gender Variant expression as a resource for all of the signatory organisations of the Memorandum of Understanding and their members.

7. Actively support people from disadvantaged and underserved communities to train as therapists especially BAME and Trans people who are both under represented and structurally and financially disadvantaged.

If you’re a therapist, I’d encourage you to actively lobby your professional body and ask them what they are doing to improve the mental health of LGBT+ people.

BACP made their announcement that they would be supporting extending the protections of the Memorandum of Understanding on Conversion Therapy to members of the trans and asexual communities on the same day as my membership was due to expire.  As a gesture of good faith, I decided to part with the £200 membership renewal fee in the hope that this year we can see some real and significant action.

Meanwhile, my membership application to the National Counselling Society has not only been accepted, but they awarded me membership at their highest level of Fellow. 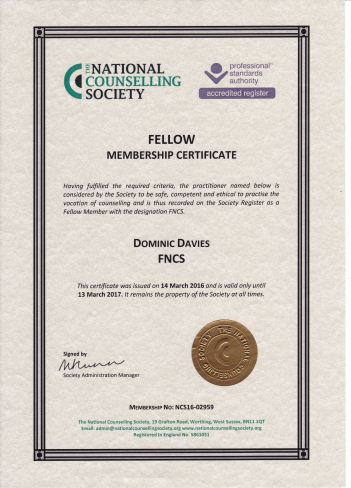