I was thrilled to make it to this year’s Rainbow List and even more delighted to have been given a higher ranking this year (No. 28) on last year’s initial entry at No.34. I’d guessed I was on the list again because a few weeks ago, I got an email from the editor at the Independent on Sunday inviting me to a celebratory party. This is the first time they’ve had such a party and of course I was delighted to accept. And Nervous. Being a natural introvert, I don’t find these things easy, but I do feel like I want to be there.

Last month I attended the European Diversity Awards with my colleague Leah Davidson. Pink Therapy was shortlisted for the Community Project award and running against some of the big guys like Channel 4 and Croydon Council as well as long standing community projects like Newcastle’s West End Women and Girls project. The awards were being held at the Natural History Museum and after consuming several glasses of champagne and probably more canapés than were wise for someone about to sit down to a three course dinner, we took our seats amongst the Dinosaurs.  The dress code was Black Tie and I had great fun wearing my second hand tux.  It’s only the second time I’d worn a tux, the first being a hired one for last year’s National Diversity Awards (we didn’t win that one either)! 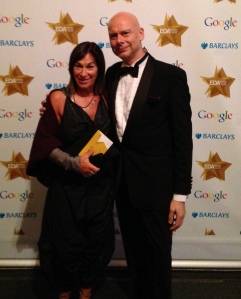 The dress code for this party was Dress as You Wish. I would have wished to wear the Tux again but didn’t want to look our of place and too formal.  But I felt this increased placement  in the Rainbow list deserved a new outfit. I don’t shop for clothes too much and I wanted something eye catching and interesting. Living in the middle of Covent Garden I set out for Floral Street and checked out Nigel Hall, Ted Baker and Paul Smith and realised very quickly that this year’s look was tiny print shirts which reminded me of pocket square handkerchief styles or even cotton pyjamas. They just didn’t grab me at all.

I popped into M&S to pick up some pyjama trousers I’d ordered online to be delivered there and as I was leaving the store my eye got caught by this incredible purple velour dress. Why is it women always get the nice clothes, I mused. Came home and ate lunch and my mind kept wandering back to that dress. If there was ever an occasion for me to wear a dress in public, then this even was probably the one. But I just didn’t think I’d have the balls. So I posted my dilemma on Facebook and was told in no uncertain terms that I ought to buy it!

After lunch before heading off to look at nice shirts, this time in Soho boutiques I returned to M&S just to satisfy myself that the dress was too expensive, or the wrong size/cut or something else I could use as a good excuse NOT to buy the dress. However, it was £40, came in every size from 8 to 20 (what size would I be?) and wasn’t super low cut or with big bosom darts. So I picked up three sizes, 16, 18 and 20 and headed to the changing rooms. Without a second glance the assistant gave me a counter for three garments and I slipped out of my male clothes and into a dress! I’m not wanting to do drag, or pass myself off as a women.

I found myself dithering between the 18 and the size 20 Both seemed to fit and I couldn’t easily tell the difference – the fabric was stretchy and I found myself wanting to get the smaller size, despite the 20 maybe feeling a little more comfortable! I’m sure this experience is familiar to many others wanting to squeeze into something smaller, so I decided to get the larger one and play it safe. I also needed something to cover up my hairy legs. I couldn’t easily see lycra leggings and getting more and more embarrassed I settle on some black tights but they need to be thick enough to cover my legs and large enough to fit me. Extra Large 100 Denier looked like they’d do the trick.

I then realised I’d need something to carry my phone, wallet and keys in. Handbags were NOT cheap and so I headed out towards Leicester Square tube and bought a £15 shoulder bag in black – multiple pockets and something that will come in handy for holidays. They had some great hats too and so after ruling out the Purple top hat, I went for a purple trilby!

My big heavy boots looked too clunky but I inherited a pair of pointy toed cuban heel boots from a friend who committed suicide last year. They looked stylish and elegant and drew attention away from my knees!

I feel very nervous going out in a dress, and remember the adage that a man learns more about being a man by wearing a dress for a day that a suit for a lifetime. I’ll get a cab to the venue and one home – as I don’t feel safe on public transport alone in a dress. It has already reminded me of the immense courage that people assigned Male at birth show when they go out in public dressed in female clothing. For most, I guess it’s their intense gender dysphoria which motivates them to present in public and show the world they have every right to be the fabulous person they are. For me, my motivations are a little less honourable. I want to learn more about myself. There will be no makeup, no attempt to overly feminise. I just want to be able to be a bloke in a fabulous purple dress!  Women shouldn’t have all the fun in dressing up!  Genderqueer allows us to redefine ourselves!  I claim my space on the catwalk!

So here are a few snaps of me in a frock.  The first was taken in the kitchen to test out the ‘look’ and so the tags are still on the dress! 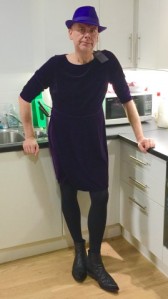 This next one is in front of the sponsor board.  There were professional one’s taken on arrival where I was told to smile more!  I must have been pretty nervous I guess!  Pity the photographic lights had gone off and it all looks so purple.

I stepped outside and there was a magnificent skyline of St Paul’s and the Shard. Pity it was raining or I’d have spent more time out here.  The views were incredible. 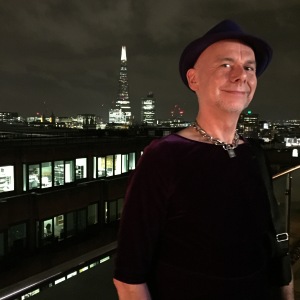 Some initial thoughts on lessons learned:

Some more very wise and sound advice from Marty Klein