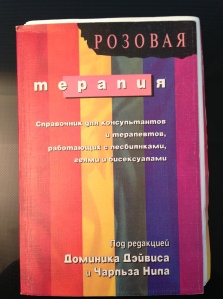 Most within the LGBT+ community will be aware of Russia’s growing presence in the news stream for anti-gay political action. The most recent piece of news, reported here on the 11th of June by the BBC, has been the passing of ban on anti-gay propaganda. The video also reports on the anti-gay sentiment still apparent and even encourage in Russia today.

In light of which, PT offers a reminder that some of our resources are available in Russian. This is in the hope that these will be available to Russian people affected by the ban and to remind them that what is being promoted by the Russian government is unjustified and cruel, and no reflection on them.

Link to the Language Project at Pink Therapy where we have a paper summarising our recent thinking on Gender and Sexual Diversity Therapy in Russian (and other languages).
http://www.pinktherapy.com/en-gb/knowledge/translations.aspx

We welcome further translators to join the project!